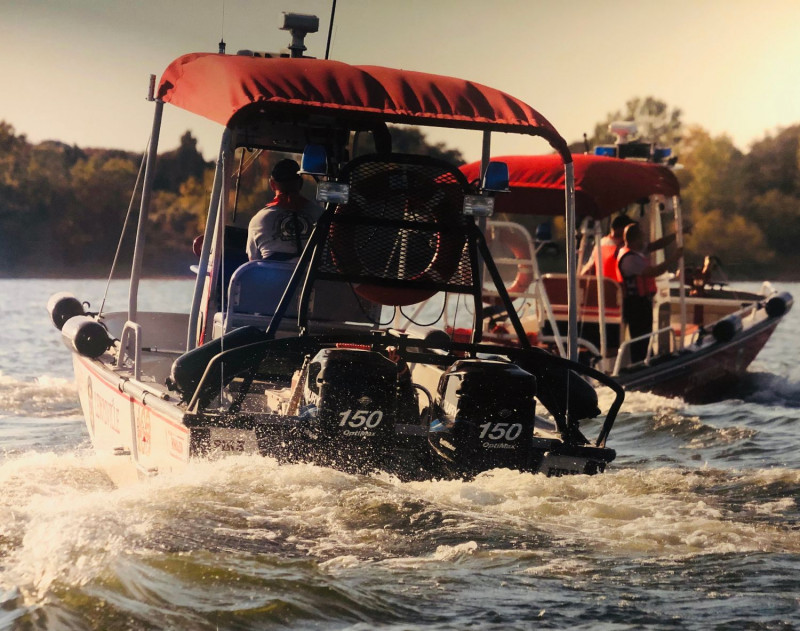 Lewisville Fire Fighters Have a Busy Night On Lake Lewisville

On August 16th members from Lewisville Local 3606 and the Lewisville Fire Department had a busy night on Lake Lewisville. Your fire fighters answered several calls for help, traveled approximately 24 total miles on the lake, and spent 3 hours and 20 minutes on the water. Battling large waves, both mechanical and equipment failure, your fire fighters never gave up and heroically battled harsh conditions to save multiple lives on the water.

Starting at 6:30 pm, Boat 169 (BT169) was dispatched for a stranded boat at the beginning of the storm. While preparing to launch, BT169 was advised the stranded boat had made it to safety.

BT169 was then dispatched for a stranded boat that was reported to have 12 people on board. There were 4 people on board who couldn’t swim and there were not enough life jackets on board. As BT169 exited their slip at Eagle Point Marina to make their way out of the marina, they encountered 2ft to 4 ft waves inside the marina. Once on the lake, BT169 encountered 6ft to 8ft waves. Due to the waves, BT169 could not offload the passengers. They provided life jackets to the passengers that needed them. The decision was made to have them drift to shore where they could safely exit the boat. During this time Battalion 160 was monitoring the situation from shore and said that BT169 would disappear between the waves. They also said when the boat would crest the wave, approximately 12ft of the boat would be out of the water.

BT169 then responded to another stranded boat call this time with 6 people on board. They were able to find their way to shore in Lake Dallas. Chief 166 was on scene and started his trek, to assist the boaters away from the shore through a heavily overgrown area. Thanks to our partners in Lake Dallas for their assistance.

At this time BT169 started to make their way back to their slip at Eagle Point Marina when they experienced mechanical issues. BT169 was able to make it back to the marina safely using one motor.

Once back, they were dispatched, along with Firehouse 2, for a reported drowning on the lake. They quickly switched to Boat 168 (BT168) and responded to the last known location of the victim. A husband and wife were separated after the husband fell off their boat. Once on scene at Hidden Creek Cove, BT168 started searching the area. Experiencing equipment malfunctions, the crew of BT168 relied on their spotlight. BT186’s crew was determined to find this gentleman, and on the third pass through the search area, BT168 spotted something that did not look right. BT168 moved in closer to investigate, and clinging to a tree, in a stump field, was the husband with his head above the water. This man spent approximately 3 hours in the water. BT168 rescued him and brought him to safety; ultimately saving this man’s life.

August 16th was a scene from a movie on the lake. Under the supervision of Captain Bassinger, Firefighter Reed was able to use his seasoned situational awareness skills to very specifically direct the skillful Engineer Kirby to carefully pilot the boat into the appropriate position. Their determination and dedication to the City of Lewisville, keep with the highest traditions of the fire service. Lives were saved because these heroes never gave up.

Lewisville Local 3606 and Lewisville Fire are committed to the safety of our community, on and off the water. Prior to August 16th, the department was conducting additional boat training, as the department is relocating one of the Fire/Rescue boats to provide better coverage. We thank our community for their continued support of your fire fighters.

We will always answer your call, no matter what.