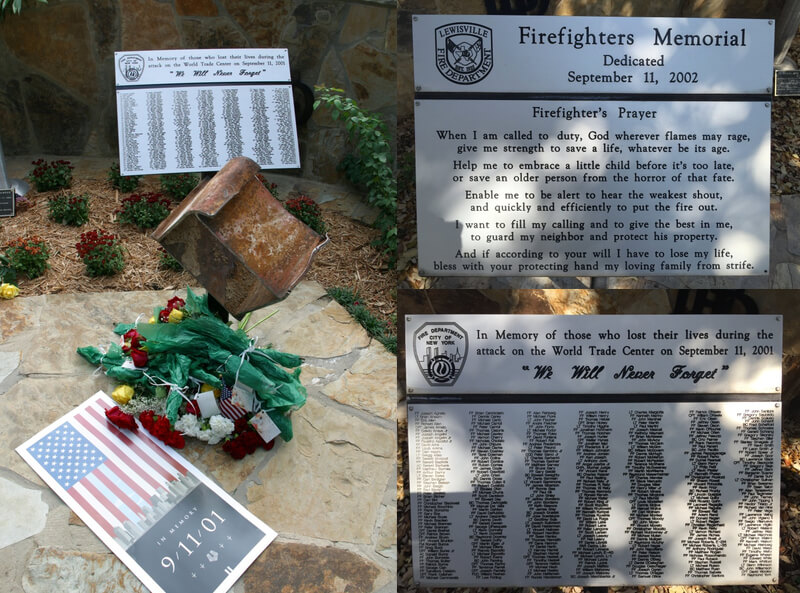 The Firefighter Memorial was dedicated in August 2002. The planning for the memorial started in mid-2001, but those plans were put on hold after the events of September 11. When the plans were revived, it was expanded to include a remembrance of the firefighters who died in the terrorist attack on the World Trade Center.

The memorial was built at no cost to the city. Landscaping, stone, a flagpole and other materials were donated by about a dozen local businesses. Labor to build the memorial was provided by local businesses and by Lewisville firefighters. (For example, firefighter James Sullivan was scheduled to retire in August but delayed his retirement by a month in order to finish the welding for the project.)

The focal point of the memorial is a section of a box beam removed from the remains of the collapsed World Trade Center South Tower. That was the second tower struck and the first tower to fall. Judging from the heat and stress on the beam, officials believe it was either on the floor that was struck or the floor right above the impact. The section of beam was a gift from firefighters in Newark, N.J., and was delivered to Lewisville for free by Federal Express. It is about a foot long and weighs 88 pounds.

The memorial is located outside Central Fire Station, 188 N. Valley Parkway. This location was chosen to be convenient for both firefighters and members of the public who want a place to reflect on the sacrifices made by firefighters not only at the World Trade Center but everywhere.