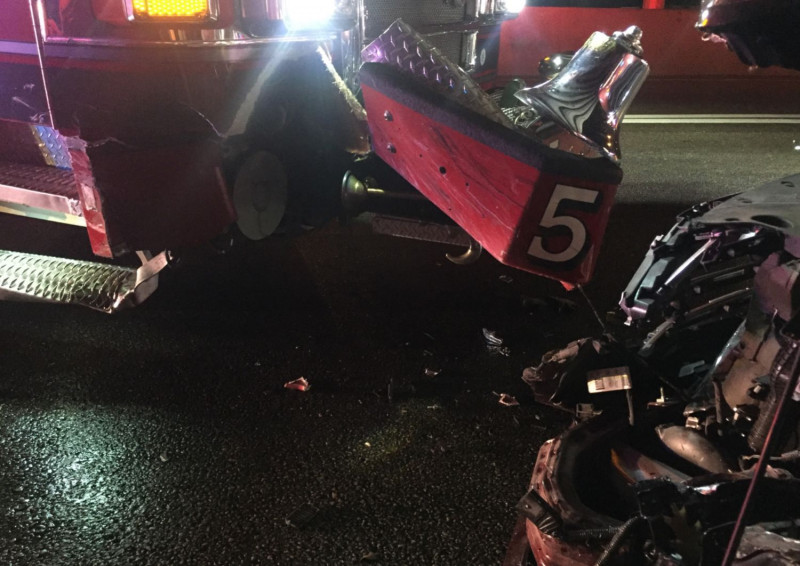 A little after 3:00 AM this morning, May 23rd, your Lewisville Fire Fighters responded to a reported Major Accident in the 2400 blk of S I35E for a Major Accident. While operating on the scene, a passenger vehicle struck the Officer’s (Passenger) side of Lewisville Fire’s Engine 5. As you can see in the picture attached, the fire engine sustained damage to the front panel and bumper on that side. At the time of the accident, no fire fighters were inside of the fire engine and no fire fighters sustained an injury. This accident is still under investigation and no further information on the investigation can be provided at this time.

Though this accident could have been much worse, we would like to remind everyone of the importance of slowing down and moving over for emergency vehicles. Responding to emergency incidents on a roadway, especially a highway, is inherently dangerous regardless of the weather. Your fire fighters shut down lanes and put traffic safety measures in place for a reason. These measures are to protect the people involved in the accident, your Lewisville First Responders, and motorists traveling on the roadway.

In 2003, the Texas Move Over/Slow Down law went into effect because of the danger we are writing about. On May 21st, 2021 HB3319 passed the Texas Senate is moving to the Governer’s desk relating to these same measures. Some have asked, why was this bill necessary if the Texas Move Over/Slow Down law went into effect in 2003. This incident Lewisville Fire Department experienced is just one of many, that highlight the need for education on this law. HB3319 was drafted to promote compliance with and improve public awareness of the state's move over or slow down law concerning the passing of certain vehicles. An additional goal of HB3319 is to place more signs drawing attention to this law and reminding people to move over and slow down. We would like to thank the many people who tirelessly worked on the drafting and passing of this bill.

For the safety of all Texas First Responders, yourself, and all motorists traveling on any roadway, please move over and slow down for emergency vehicles. Safety is the top priority and we are committed to keeping everyone safe.